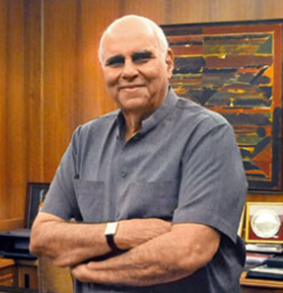 Mr. Khushroo N Suntook has had an illustrious career spanning over four decades in business, initially as one of the founders of India’s first mineral water company, Bisleri, and later in various senior capacities in the Tata Group. He joined the National Centre for the Performing Arts, India’s premier performing arts institution, first as the Vice-Chairman in 2000 and then as the Chairman in 2008. His tenure as Chairman of NCPA has witnessed changes which have vitalised this venerable institution.

Mr. Suntook is an avid music lover and has made a conscious effort to promote music in the city. Over the years, his passion for Western classical music has led him to visit numerous international classical music and opera festivals. He is known in the record collecting world, and speaks to international audiences on old and rare vocal recordings and has a fine collection of vintage records. In 2006, Suntook gave India its very own orchestra — The Symphony Orchestra of India which is now in its 26th season, having achieved international status after touring many cities of the world to triumphant performances. He has also established the SOI Music Academy, where advanced students are playing at a high level with the ultimate aim of joining the SOI. Having started her own company at the age of 27, Ms. Nandita Anjaria has been an entrepreneur for more than 30 years. Having been a director in many companies, she brings together managerial skills and passion for the performing arts in her role as Senior Advisor (Honorary) at the National Centre for the Performing Arts. She is also a member of the organisation’s Western Classical Music and Theatre committees. She has been instrumental in organising the Add Art Festival, a multi-genre celebration of the NCPA’s completion of 50 years. 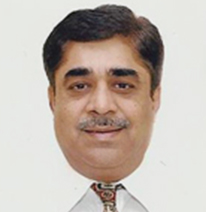 Mr. Prashant Karkare has had a corporate career spanning over four decades across various capacities, most recently as the Vice-President of Business Improvement Group & Property Development Cell, Voltas, where he was responsible for driving initiatives such as Business Excellence, Process Improvements, Innovation, Knowledge Management, Corporate Social Responsibility, and Corporate Sustainability in addition to handling all the property development matters. Mr. Karkare is a Fellow Member of the Institute of Company Secretaries of India, Intermediate C.A and with a degree in Law from the Mumbai University. In addition, he has completed Management Programs conducted by the Indian Institute of Management, Ahmedabad, and INSEAD. He has also completed Six Sigma Black Belt Programme conducted by the Sigma Institute, Glenview, Illinois, USA. Nayan Kale is a qualified Electrical Engineer with a postgraduate diploma in computer software, systems analysis and applications. He has also taken an advanced course in Sound Recording and Reproduction from University of Mumbai.

He has over 45 years of professional technical experience with an excellent track record for managing technical facilities, engineering operations, and maintenance management. Kale is involved with the NCPA’s engineering and technical aspects since 1982. He has played an essential role in designing theatres to the opening night. He has significant experience in providing technical support for various events and performances. 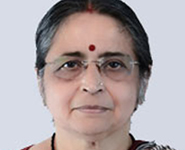 Dr. Suvarnalata Rao is a senior musician and musicologist working in the field of computational musicology. Having trained as a sitar player in the Hindustani tradition, she obtained Ph. D. in music for her work in the area of psychoacoustics of music. Her other research interest is in the field of organology, for which she received the Homi Bhabha Council fellowship.

As Head – Programming (Indian Music), she programmes, curates and presents annually over 100 innovative events and festivals, representative of everything from classical to contemporary music, at the NCPA as well as venues outside Mumbai.

A recipient of several national and international Fellowships, she has been a visiting Faculty at various educational institutions across the world.

Her publications include numerous research papers and books including her dissertation, Acoustical Perspective on Raga-Rasa Theory and Raga Guide, an audio-literary production by the Nimbus Records, U. K.

Besides being an editor/co-editor of a number of music related monographs and journals, she has been responsible for developing NCPA’s unique website titled Music in Motion (www.autrimncpa.wordpress.com) which allows to hear and “see” music at the same time.

Since 2011, she is a board member of Music Council for Asia Oceania (MCAO), under the International Music Council (IMC). Recently she was honoured with Dr. Ashok Ranade Memorial Award for contribution to research in the field of Indian Music. 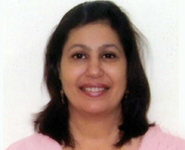 Music and art being an intrinsic part of her background, Ms Farrahnaz Irani has been in the world of music for over three decades, sharing her expertise in various capacities, notably her handling of public relations and ground events for the Universal Music (India), where she managed events for Indian and international artistes.

Her key role in the promotion of art and culture at the NCPA has included assisting the Symphony Orchestra of India since its inception. She heads the International Music department at the NCPA, which requires her to conceptualise, plan and execute International Music programmes, including curation of festivals dedicated to an array of genres that present some of the biggest international names, as well as those dedicated to promoting new talent. 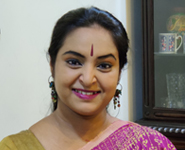 Swapnokalpa Dasgupta is a highly dedicated Odissi dancer, teacher, arts manager and curator who has been the Head of Dance Programming at the National Centre for the Performing Arts, NCPA in Mumbai for the past 7 years along with actively pursuing Odissi dance.

She has learnt Odissi under Padma Vibhushan Guru Kelucharan Mohapatra. She started her journey in Odissi dance with the affectionate guidance of Guru Giridhari Nayak. She has also received rigorous training from Guru Poushali Mukherjee in Kolkata and Guru Sujata Mohapatra and Guru Ratikant Mohapatra in Orissa.

Swapnokalpa has her dance school SWAPNOKALPA in Mumbai and Kolkata.She is credited for being the first Odissi teacher of the prestigious The Bhavans, London who was able to set up an Odissi dance department at the centre. The department flourished in the heart of London. Swapnokalpa continues to impart training at the London centre as a visiting faculty and had conducted the first ever Summer school for Odissi dance at the Centre in 2019.

Swapnokalpa has received the prestigious Senior National Scholarship in Odissi dance and is a graded artiste of Doordarshan. As a young performer she has received the Pratibha Samman from EZCC (Govt of India) and has performed in many prestigious dance festivals in India and overseas like England, France and Ireland. Swapnokalpa is a noted Odissi performer and regularly performs in India and abroad. Awarded First Division with Distinction in practical in 1995, 1996 and 1998 for the Diploma course in Classical Odissi Dance (Sangeet Visharad) from Pracheen Kalakendra, Chandigarh.

Awarded the prestigious All India National Scholarship (Senior) for Odissi dance by the Ministry of Culture, Government of India in 2001 (received this at the age of 18; one of the youngest dancers in India to have received this award).

Currently in the panel of artists selected by the national television network of India, Doordarshan for dance and other cultural programs organized by the network.

Some notable performances as Professional artiste Guthrie is a member of The Guildford School of Acting's Advisory Board and has been Artistic Director of the National Youth Theatre of Wales. Some of the concerts and events he has helmed have been part of HRH The Prince of Wales 70th Birthday Celebration, and The Welsh Guards Centenary Celebration in 2015 for the Welsh Guards Charity. 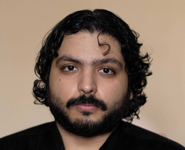 Xerxes Unvala serves as the General Manager of the Symphony Orchestra of India and Western Classical Music programming at the NCPA.

His first experience with arts management was with the Vail Series at his alma mater, Denison University, where he gained experience in various facets of concert production and management, working with such renowned artists as Yo-Yo Ma, Renée Fleming, and Emanuel Ax, amongst others. Prior to joining the NCPA, he spent five years at the John F. Kennedy Center for the Performing Arts, Washington, D.C. Initially working in the offices of the National Symphony Orchestra, he then joined the Office of International Programming, where he was part of the team producing numerous large-scale, multi-genre international arts festivals including maximum INDIA and Nordic Cool 2013. He has been with the NCPA since 2013. 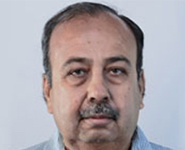 Mukesh Parpiani is a renowned photo-journalist, having had an active media career of over 30 years. He has worked with The Daily and been the Photo Editor at The Indian Express and the Mid-day.

Parpiani took up the cause of popularising photography as an art form when he joined the NCPA. Since then he has organised several exhibitions in the gallery space. These exhibitions have showcased the individual works of established photographers but also that of budding students from different institutes of the city.

In 2012, Parpiani organised a retrospective exhibition on the Masters of Indian Photography, showcasing the pictures from the NCPA Archives. This was accompanied by a display of reference books and antique 19th century cameras for photography enthusiasts.

Parpiani is passionate about photography and even more so about popularising it among the public at large. He believes in showcasing diversity of talent, promoting new ideas and developing the gallery as a creative space for the exploration of the multiple dimensions of photography. With an experience of over 30 years in HR, Administration and Industrial Relations, Vincent Dsouza has a comprehensive understanding of human resource management systems and business issues, a talent he has showcased in devising and implementing coherent HR strategies. A keen strategist with leadership skills, he has guided teams of professionals towards maximum productivity through consensus-building, negotiation and interpersonal skills, problem-detection/solving abilities. A management and law graduate, he is well versed in labour laws and human rights. 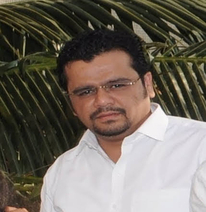 Mr. Siddharth Deshpande has been with the NCPA for over 14 years in the Finance and Accounts team. He is a qualified Chartered Accountant from the Institute of Chartered Accountants of India. He has also completed his Masters in Commerce with specialization in Finance and Accounts from the University of Mumbai. He has been a Gold Medalist in the College and a merit rank holder in the B.Com Examination of the University of Mumbai.

Mr. Deshpande has been awarded by the Institute of the Chartered Accountants of India, for his exceptional performance and achievements as CA Corporate Contributor in the NGO and Allied services sector. He has also been nominated on various Committees of the Western India Regional Council of the CA Institute.

His experience in the area of auditing ranges from his work at the Bank of Baroda, Bank of India to other corporates. At the NCPA, he has been handling Budgeting, Income Tax, Management Accounting, Management Information System (MIS) as well as Secretarial work.

Mr. Deshpande has written for the Maharashtra Times and Loksatta on the subjects of economics, union budget and globalisation and its impact.

He is fond of Indian music, classical and otherwise, and has interest in cricket as well. Pursuing these interests, Siddharth also anchors music programs.

Know More
No Trailer To Show